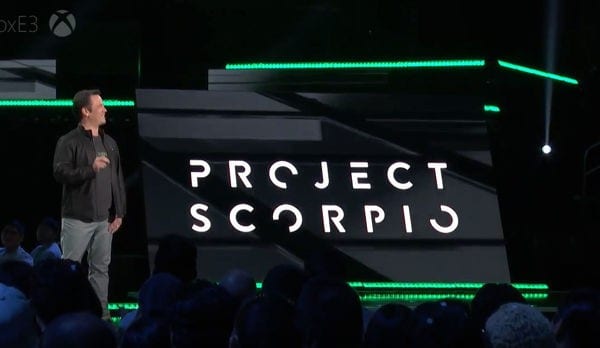 After months of rumors and leaks from the “interwebs,” Microsoft revealed the new Xbox One, code-named Project Scorpio during their “Day 0” conference Monday evening(6/13). The new console is expected to release next year in time for the 2017 Holiday.

Scorpio is a part of upcoming console updates from Microsoft, including the Xbox One S, which is slated for release 8/31/2016. The S upgrades the original Xbox One with a 40% smaller size console than the behemoth released in November of 2013. Also included is the ability to stand the console vertically, a more “streamlined” controller and finally the ability to display 4K Ultra HD video.

Project Scorpio, however, takes the upgrades from the S and moves to the next level of allowing true 4K Ultra HD gaming at a standard 60Hz with an amazing six teraflops processing power to deliver the next level of gaming. Also noted during the conference was Microsoft’s plunge in the world of VR gaming with Scorpio being the catalyst. There were no specific hardware announcements made concerning the future VR peripheral.

These announcements yesterday has brought a lot of excitement to the gaming community but has also brought along questions of support of the current Xbox One console. Normally, the lifespan of current generation systems spanned anywhere from seven to ten years. Being less than three years since the release of Xbox One, gamers are concerned that their investment in Microsoft has gone by the wayside with these new releases. While on stage during the conference, Xbox head Phil Spencer stated that “all Xbox One peripherals would be supported by Project Scorpio and that all Xbox One games will be playable on the original Xbox One, the Xbox One S, and Project Scorpio with the goal being that ‘no one gets left behind.’”

Also becoming prominent is the Xbox Play Anywhere feature that allows Xbox One games to be purchased only once be able to played on the above mentioned system along with being able to be played on Windows 10.

While all this news has reassured many gamers that their investment hasn’t gone to waste, the question still comes down to what system would YOU want to play your games on? Again, Microsoft states that “no one will be left behind” and your game purchase will work on your console/PC of choice, however, wouldn’t you want to play on the latest and greatest? I know I would if I had the means. I can also only assume that as time gets closer to release of Scorpio and thereon, these games will be created with the supreme console being the target. What limitations will be made on the “lesser” consoles of the same game for the consumer who chooses not to shell out another $400-$600(MSRP for Scorpio has not been made available) after doing so within the last three years? Not to mention, most do not jump on the “next gen” bandwagon right after a console release: there likely are many who just recently unboxed their new Xbox One after saving the money to get theirs only to be told, “Hey! Look what we have coming up now!” If we’re being fair, Microsoft isn’t to blame necessarily for this decision as newer technology with 4K has been becoming increasingly popular and taking advantage of new tech can definitely be very advantageous. This is just definitely interesting concerning their timing and how Xbox consumers feel about this quicker-than-normal console upgrade. The next couple of years should be very interesting…….