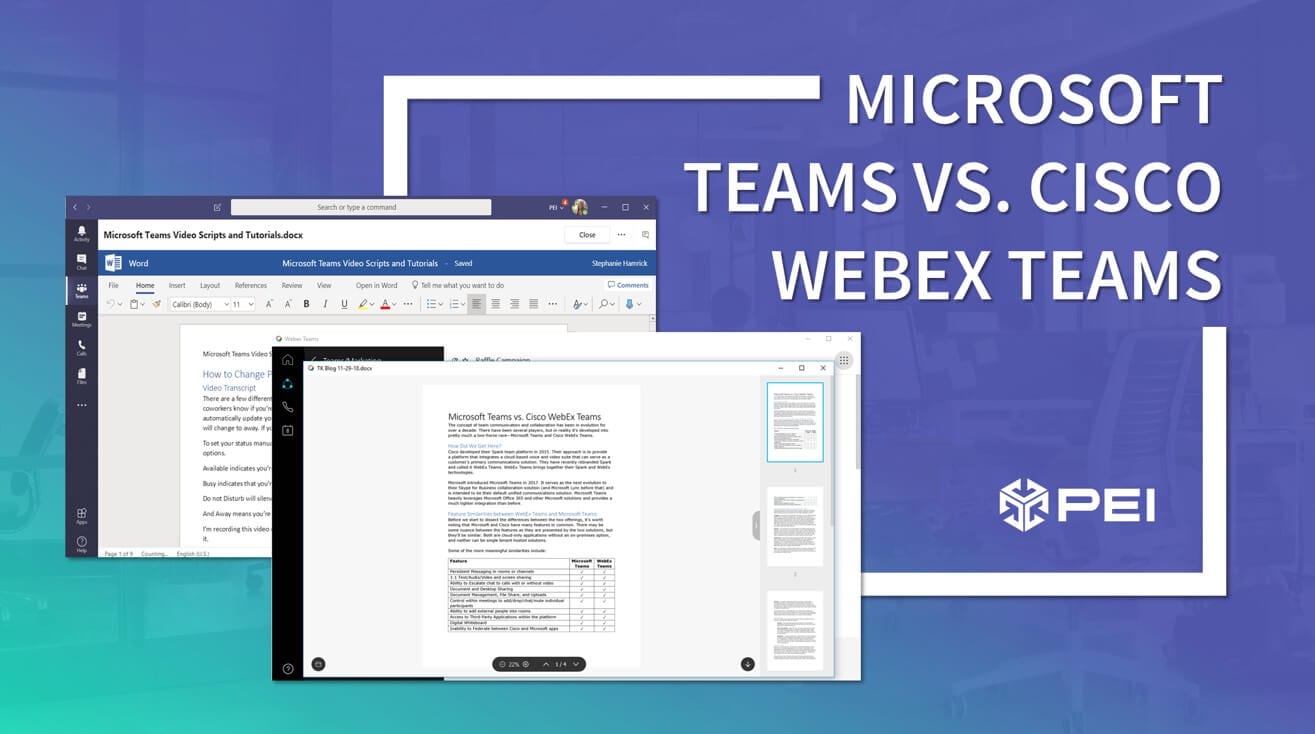 The concept of team communication and collaboration has been in evolution for over a decade. There have been several players, but in reality it’s developed into pretty much a two-horse race—Microsoft Teams and Cisco WebEx Teams.

How Did We Get Here?

Cisco developed their Spark team platform in 2015. Their approach is to provide a platform that integrates a cloud-based voice and video suite that can serve as a customer’s primary communications solution. They have recently rebranded Spark and called it WebEx Teams. WebEx Teams brings together their Spark and WebEx technologies.

Microsoft introduced Microsoft Teams in 2017. It serves as the next evolution to their Skype for Business collaboration solution (and Microsoft Lync before that) and is intended to be their default unified communications solution. Microsoft Teams heavily leverages Microsoft Office 365 and other Microsoft solutions and provides a much tighter integration than before.

Before we start to dissect the differences between the two offerings, it’s worth noting that Microsoft and Cisco have many features in common. There may be some nuance between the features as they are presented by the two solutions, but they’ll be similar. Both are cloud-only applications without an on-premises option, and neither can be single tenant hosted solutions.

Some of the more meaningful similarities include:

Want to dive deeper into Microsoft Teams functionality? Check out our video resource library to discover all the things you can do with Microsoft Teams.

Even though the Microsoft and Cisco solutions are similar, there are also several fundamental differences. At the center of their respective approaches is the fact that they each steer the user towards their rest of their proprietary solutions.

Microsoft has had the Skype for Business voice and meeting platform. Microsoft Teams includes a next generation voice platform that is even more tightly integrated with Microsoft Office 365. Whereas Skype for Business had both cloud and premises-based solutions, Teams will only offer cloud-based telephony.  Outlook, OneDrive, SharePoint and a host of other Microsoft tools provide the applications within Teams. The Microsoft Calling Plan provides the PSTN services within Teams should you wish to source these services directly from Microsoft. Cisco WebEx Teams leverages Jabber and Cisco’s Unified Communications Manager and Hosted Collaboration Suite platforms.

Cisco provides end-to-end encryptions of all WebEx Teams data, and customers can control their own encryption keys. Cisco encryption addresses the transport of data, but not the storage of encrypted data on devices. Cisco also has federation between different organizations using WebEx Teams, while Microsoft doesn’t yet have intercompany federation. Microsoft relies on their Intune mobile device management and encryption at rest and in motion for device security.

Microsoft has made the integration of Office 365 a primary mission within Microsoft Teams. The rich and tight integration has made collaboration, access, and storage within Teams a powerful tool when coupled with their messaging, voice, and meeting platforms.

Cisco WebEx Teams leverages their meeting apps and a variety of apps and tools from their third-party partners. It’s important to note that Cisco users will still need productivity tools (i.e. Microsoft Office 365, Google, etc.) coupled with WebEx Teams. This is one area where Microsoft Teams is the clear winner. Microsoft Teams allows you to edit office files directly within the application, while in Cisco WebEx Teams you can only view files. 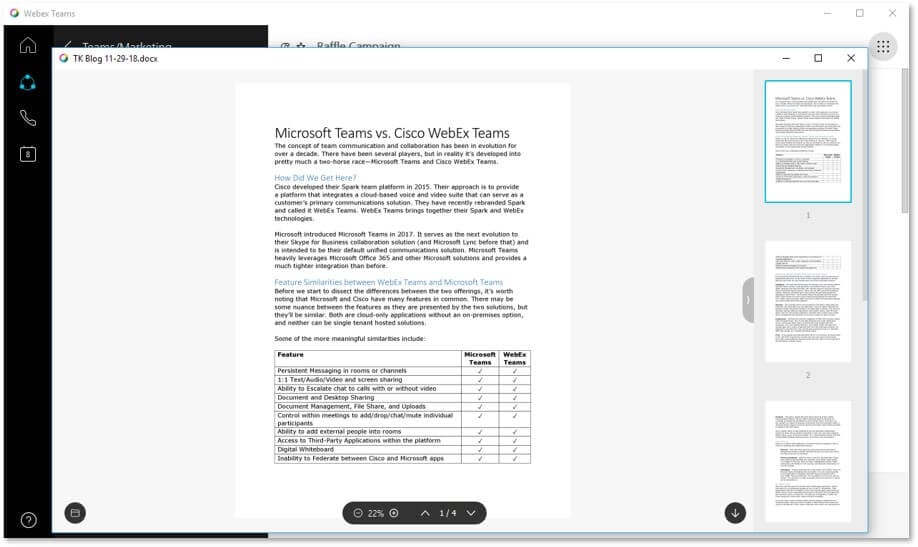 If you already have an Office 365 for Business plan, Microsoft Teams is free. The cheapest plan including Microsoft Teams is $5/user/month (Business Essentials), though of course there are some limitations for add-on licensing with Business Premium.

Cisco offers several different licensing bundles but know that you will be paying for the full features of WebEx Teams with each. You get WebEx Teams with a WebEx Meetings subscription, which start at 13.50/user/month. Calling services add-ons will also add onto this price, similarly to the Microsoft model.

Cisco’s WebEx Teams is really designed as the next generation collaboration solution for those with an existing investment in Cisco voice and video endpoints. WebEx Teams is part of the Cisco portfolio. It’s a well-integrated solution with their existing WebEx Meetings offering and their on-premises voice technologies.

There are a range of other differences I’ll mention that aren’t significant when it comes to comparing the collaboration features.

Security – Cisco uses third-party telco and cloud services and doesn’t manage those locations directly. Microsoft has their own cloud and controls the physical security on their fibers.

Service Availability – Based on what I could find, Microsoft offers Teams voice calling in approximately 181 countries. Cisco WebEx Teams calling is in roughly 70 countries. Both are clearly multinational solutions. Audio conferencing with WebEx is in 45 countries, and Microsoft conferencing is in over 90 countries.

Federation – Another important note is that neither Cisco WebEx Teams nor Microsoft Teams will federate with one another. It is not currently possible for an organization to integrate a Microsoft Teams environment with a Cisco WebEx Teams environment. The two platforms will not work with one another. You can either run them in parallel (which isn’t practical) or choose one to standardize on.

Both Cisco and Microsoft have excellent team collaboration applications. What it boils down to is a fundamental question of your current IT investments. Those organizations that have committed to Cisco voice will most likely want to focus on WebEx Teams. If your organization has focused on Microsoft Tools and Office 365, then Microsoft Teams is a natural fit. The high level of integration, coupled with Teams being free in most cases, makes it beyond compelling.

If you don’t have a focus on either vendor and are looking to migrate from an old phone system, then you’ll want to conduct a needs analysis and compare the results to the features of each vendor’s offerings. Both vendors are represented by excellent partners. Find a Cisco and Microsoft partner that specializes in Voice and Collaboration in your geography and engage them to help with determining what’s best for you.

Need help deciding? PEI can help you develop your unified communications strategy to fit your business. Contact us to get started!